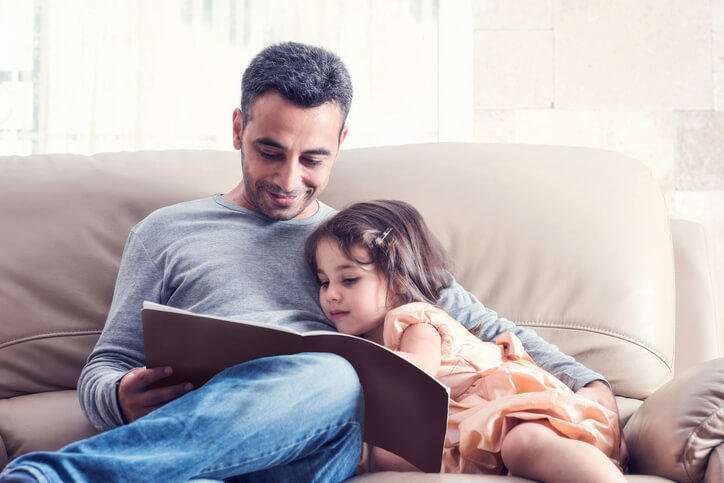 The role of the father has undergone a sea-change in the present social structure. Gone are the days when the father figure was limited to just providing food and shelter. With industrialization, the father was seen as a factory worker whose contribution to the family was to get money. Child care and parenting mother’s forte. In the current scenario, with education and job opportunities being within the reach, more and more women have joined the workforce. Unless the father pitches in, parenting of the child by the mother alone would be difficult. Thus, more and more millennial fathers are actively contributing to child development.

The role of father in child development:

In the present day scenario the father has to not only share the financial burden but also the parenting duties. Apart from that, the father’s personality, behavior and interactions  have a direct impact on the child’s personality. Further how the father-mother relationship is, is also an indicator of the child’s future relationships. The father plays a very pivotal role in the upbringing of the child. Some are listed as follows –

From the ancient times father is seen as the protector of the family. Whenever the child feels threatened or insecure, he approaches the father. In childhood, the fears range around darkness, opponent, animals , insects etc. The presence of father instills courage in the child.

As a father,  you can instill your passion for music, games, outdoor activities, and academics etc. The child gets an opportunity to observe and closely follow his father. At one point of time, the child  is inspired by the father to take up the activity which is close to his heart.

As a father, you have to be aware that your child is watching every step of yours and listening to every word you are speaking. You never know what action or speech of yours will be picked up by your child. When a child takes the father as a role model, the father’s behaviour and actions should be such that it makes maximum positive impact on the child. Example a sports person will have a child who loves sports. But a father who smokes cannot stop his child from smoking.

The father who is a friend to his child will have no secrets. The absence of fear or any authority will make the relationship between them open and friendly. The child will have confidence since he knows that he can share any of his secrets or personal problems with his father.

The father can take up the role of an entertainer for his child. How many times have we seen a little child giggling with laughter when the father makes faces. The child can depend on his father to entertain him with jokes, anecdotes and stories which in turn will strengthen the relationship.

The father can be the best counselor to his child whenever there is a need. The child can discuss with his father about his academics, extra-curricular activities and relationships. The child can bank on his father for advice and encouragement. Father is a person closest to the child after mother with who he can share his innermost feelings.

Father can be an excellent trainer to his child whether it is sports, fine arts , academics or adventure. The presence of father will make all the difference to the child who ventures into a swimming pool for the first time. The father can impart self-discipline, responsibility and self-reliance in his child to face the world with positivity and determination.

Fatherhood techniques that can make an impact:

Every father has his own secret techniques to parent his child. Let me enlist a few of them.

Time runs fast when you are involved in parenting your child. Before you realize your child is in college away from home, be aware of all the antics and fun you share with your child.

Forget the age-old traditions that only mothers can parent the children. Though its all-new for you, you should learn some parenting tips and contribute equally to your child’s development.

3. Allow your child to speak:

If you are a long distance father posted in a far off place, make up for your absence when you are with the child. Allow your child to speak about all that has happened when you were not there. Try to get to know his hobbies, friends, and activities he is interested in. Make an effort to be present on birthdays, sports day, annual day etc.

When parenting, try not to lose your patience. Conquer your child with lots of love and affection. Even when your child has done a mistake, try to forgive. Your scolding or shouting will have only a negative effect.

5. Encourage them to play:

Encourage your child to play a lot and you be a part of their imaginary world. Build toys, make swings and camps in the garden which will delight your child. Hide and seek game in the house can be fun-filled.

The sense of humor is a great way to diffuse tension. Sometimes your child may come home in a bad mood since he lost in a game. Your comments with a sense of humor will lift the spirit of the child. He will learn that winning and losing is a part of life.

You and your wife must showcase such behavior if you want your child to follow the same. There should be consistency in the behavior even in the absence of your child.

8. Treat your family with respect:

Treat your wife, i.e., the child’s mother with respect and take her opinions when it concerns the child. Never ever fight or backbite about your wife in the presence of your child. Your relationship with your wife will decide whether your child will be happy or unhappy.

Accept your child’s personality as it is. Do not forcibly try to modify it by forcing your child to do things which he is not comfortable with.

Role of the father in a grown-up son’s life:

Most fathers want their sons to be tough. And for this reason, the father may want his son play football, climb a tree, go trekking, swimming etc that it will make him strong and manly. Conflicts arise when the son wants to pursue creative arts like dance, cooking, painting etc. As your child enters high school, it is time for you to step back and be more a friend than a father. If you insist on being an authoritarian father, conflicts will arise. Better avoid this and be a friend so that your child can share with you his ups and downs. A grown-up son needs guidance and counseling, especially when he goes for higher studies and has to apply for college. As a father, you have to be unbiased as you give your advice. Forcing your dreams or preferences won’t help and will only distance you from your son.

Role of the father in a grown-up daughter’s life:

The way a father treats his wife, his female friends, and relatives make a big impact on the daughter and is a deciding factor in her relationships with men.  Father can involve himself in his daughter’s life from early childhood by playing, feeding, clothing and helping her in her studies and extra-curricular activities alongside with her mother, thus sharing parenting and lessening the burden on the mother. As the daughter grows up, the father becomes a friend, guide and confidante. She learns from him things only a father can teach. For example – fixing a car tire, repair the toaster, playing football, horse riding etc. When the father is a role model for the daughter, she will have a positive image of men who come into her life.

A father-son relationship is a balancing act where the father though loves his son, doesn’t show or opens up. He wants to be the tough guy and be a role model for his son to emulate. There will be a shift in the balance when the child grows into an adolescent and then adult where he will be more open and look forward to seek advise from the father. In the case of a daughter, the father dotes on her and is ready to fulfill all her wishes. He hovers around her as a protective figure. He tries to curtail her movement fearing any untoward incident. This doesn’t really help. Under the present circumstances, the father should understand that a daughter who is educated and embarking on career needs confidence and independence. Holding her back will not help. Rather educate her on how to handle untoward situations like harassment, mugging, racial, gender discrimination etc.

What does the research say:

The research says that a father who is involved in parenting right from infancy to adolescent has a positive influence on the child. The father’s interaction will have an impact on a child’s social and emotional development. According to www.psychologytoday.com, numerous studies suggest that the nurturing style of the father is responsible for verbal skills, intellectual functioning and academic achievement among adolescents.

Until a decade ago it was only the child and the mother when it came to parenting. Father was a distant figure for the growing child. The times have changed. With the nuclear family as the norm, more and more fathers are actively getting involved in parenting. Even if it is a joint family, the fathers are aware of the importance of parenting. The child is benefiting with two individuals giving care and guidance in different areas like personal, social, intellectual and spiritual. Such a child will be smarter, well behaved and will have a good interpersonal relationship at home, workplace, and community.