Following is a major takeaway for parents, seeking some smart parenting tips!

1. A fantastic portrayal of Anand Kumar’s family. Makes me believe a family that respects each other, understands each other and laughs together. What a fantastic relationship between the father, mother, and their sons. They made sacrifice look easy.

2. When the father said, “Now, the king’s child won’t become a king, only the capable/deserving one will become the king” it made me want to stand up and clap for him. It is such fathers who give roots of character and the power of wings to the dreams of their children.

3. In another scene, the librarian has no love for the student who wishes to study but just wants to defend his turf…that too arrogantly. The poor clerk shows Anand Kumar a direction and gives him a goal as well – ‘Get your article printed and you will receive the magazine for life.’ It shows how single, well-meaning guidance can turn a life around.

4. Anand Kumar gets selected for Cambridge. But the family could not raise the money required to travel there. Thus, dad died of shock and in order to support his family, Anand Kumar started selling papads. Life hits a low. But, but, but, it’s not the end of the story. It rarely is.

5. Anand Kumar began earning a lot of money through his work in the coaching classes. For the first time, the postman’s family saw comforts of life. A series of unrelated experiences gives Anand Kumar a change of heart. He decides to prepare poor fantastic kids for IIT exclusively. Used to a life of new comforts, his brother asks Anand Kumar, “Is it necessary to do all this? All is going well.” To this, Anand Kumar asks, “Kiska?” The brother mutters – “Apna!” and realizes how foolish he sounds. A determined Anand Kumar moves away from having made his point.

It’s clear, his conscience has spoken aloud and won. It’s clear he had decided; he won’t be living his life for himself or his family’s comforts; he will be dedicating his life to the dreams of talented and poor children.

6. Anand Kumar was asked, “Will the poor kids reach till him ?” Anand Kumar calmly replies, “I won’t stop.” It was as if he is effortlessly living the wisdom of Bhagwad Geeta where Krishna urges Arjuna, “Do your duty and leave the rest to me.” What a living example of smartness, selflessness, and determination.

7. The movie is rich in metaphors. For me, the best one was this – “The rich folks made a smooth road for themselves. They made huge potholes on our roads. That’s the mistake they did. When the time comes, we will take the biggest leap.”

8. Towards the end of the movie ‘Super 30’, just before the results are declared, “He asks the kids to visualize their parents.” What a moment for me! What impact parents have in the life of the kids! Without the great father, who is a powerhouse of humor and positivity, Anand Kumar wouldn’t be who he is. Without the simple, funny, supportive mother, it was impossible for Anand Kumar to pursue his mission. I guess that is why he wants the kids to remember the faces of their parents. Goosebumps! 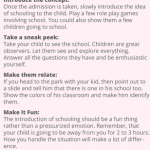 Hacks to prepare your kid for school