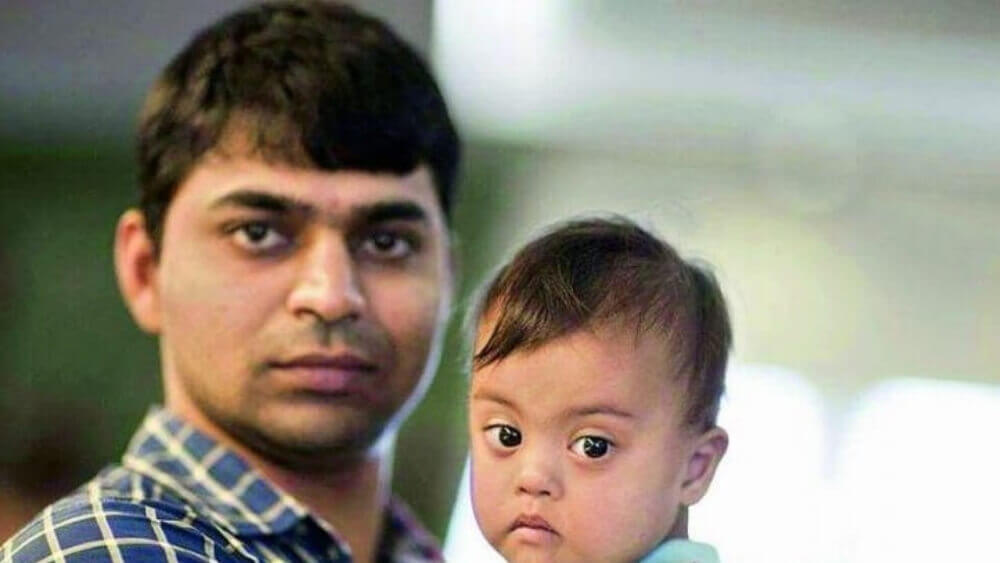 Being blessed with a child with disabilities is the ultimate test of parenthood. Some parents just give up from the start and try to get rid of these kids, others are disappointed but accept their fate, and then there is the third kind – those who embrace both the joy and struggle of loving these special children.

Binny was born on March 16, 2014, in a well-to-do family in Bhopal. But just a few days after his birth, his parents surrendered him to an orphanage. He was their third child and was unwanted simply because he had some special needs. Binny was suffering from Down Syndrome. He had a hole in his heart and his vision was affected too.

What is Down Syndrome?

Down Syndrome is a chromosomal condition that is associated with intellectual disability, a characteristic facial appearance, and weak muscle tone in infancy. All affected individuals experience cognitive delays, but the intellectual disability is usually mild to moderate. People with Down Syndrome may have a variety of birth defects. About half of all affected children are born with a heart defect. The average IQ of a young adult with Down Syndrome is 50, equivalent to the mental age of an 8- or 9-year-old child. Research says there is no cure for Down Syndrome. However, education and proper care have proved to improve quality of life.

Perhaps Binny would have improved too if his family especially parents had the courage to accept him and shower him with love and affection. But they chose otherwise.

Aditya before adopting a child:

Aditya belonged to a middle-class family in Indore. There was never enough money while he was growing up but his parents raised both their children with love and taught them compassion. Aditya had always seen his parents go out of their way to help people. Inspired by their attitude towards life, he dreamt of adopting a child once he got settled.

“When I heard about Sushmita Sen becoming a single parent, I was really inspired. But everyone around me said that it was easy for her since she was a celeb but it was not feasible for a common man.” It was regarded that he would take this step only after getting married. On September 13, 2014, however, something unusual happened, which changed Aditya’s life.

“It was my father’s birthday. We went to the Missionaries of Charity’s orphanage, Jyoti Niwas, in Indore, to distribute some gifts among the children there. It was the first time I was visiting an orphanage. All the kids were beautiful and adorable but my eyes were focussed on this one child. It was Binny. I constantly felt that he was trying to tell me something,” says Aditya.

When Aditya enquired about Binny, he was told that Binny was a special child and had been shifted from Bhopal to Indore for treatment. He was also told that no one was ready to adopt Binny because of his illness, as every prospective adoptive parent looks for a healthy and beautiful child.

“I revealed my desire to adopt Binny. However, they said I was not eligible to adopt as I was not married at that time and the age limit to adopt a child in India was 30. I was disappointed but requested them to allow me to bear Binny’s expenses. I was allowed to do so,” explained Aditya during one of his interviews, who was 27 then.

Aditya vs. the system:

But the road ahead was strewn with obstacles. First, his parents objected, asking him to get married first. Then the orphanage authorities told him they could not let an unmarried man adopt a child. For many months, Tiwari kept visiting the orphanage, trying to convince the sisters. By December, the child had been moved to another orphanage in Bhopal run by the Missionaries of Charity. In March, Tiwari was told that the child was in Delhi.

“A week later, I found out that Binney was still in Bhopal and they were planning to put him up for foreign adoption. I contacted the women and child welfare (WCD) department and sent some 100 emails to Maneka Gandhi. I complained to the Prime Minister’s Office too. Gandhi spoke to me over the phone and said she was asking the Central Adoption Resource Authority (CARA) to work with the Bhopal Child Welfare Committee and resolve this matter. After my complaint, Binney was ordered to be moved to Matruchaya, another adoption agency in Bhopal,” said Tiwari.

Even there, he found officials bewildered by the fact that a single man was adopting a child.

But it was in August that the tide turned. According to the CARA guidelines one had to be 30 years of age to adopt a child. But it was revised to 25 years last year. Tiwari was now eligible to adopt Binney. “I finished all formalities within 15 days and by month end, Manekaji visited the orphanage to see Binney, where she instructed that he should be handed over to me immediately. But alas, the authorities at Matruchaya remained reluctant. They first tried to convince me to adopt another child, then scared my parents by saying no girl would marry me and when all failed, they kept delaying the adoption process. Once again, I petitioned the PMO and WCD. The central government sent a notice to the state government and finally due to mounting pressure, in December 2015, I got a mail asking me to take Binney home between January 1 to 8,” Aditya shared this in one of his interviews.

Ending on a positive note:

The worst phase has now ended, Tiwari is home with his son, who has a new name (Avnish Tiwari), and parents who now can’t get enough of their new grandson. “I took him to a pediatrician who said we might not require immediate surgery for the hole in his heart. As far as Down’s syndrome goes, I have read up about it and consulted doctors. I know my son’s mental growth will be slow but unlike his biological parents, I won’t give up. The doctor says if Binney is around children, it will be better for him. Thankfully, there is a daycare in the office building, where I plan to keep him. I also get an adoption leave of 150 days. But so far, there hasn’t been a need. He has fit right into my schedule,” he shared.