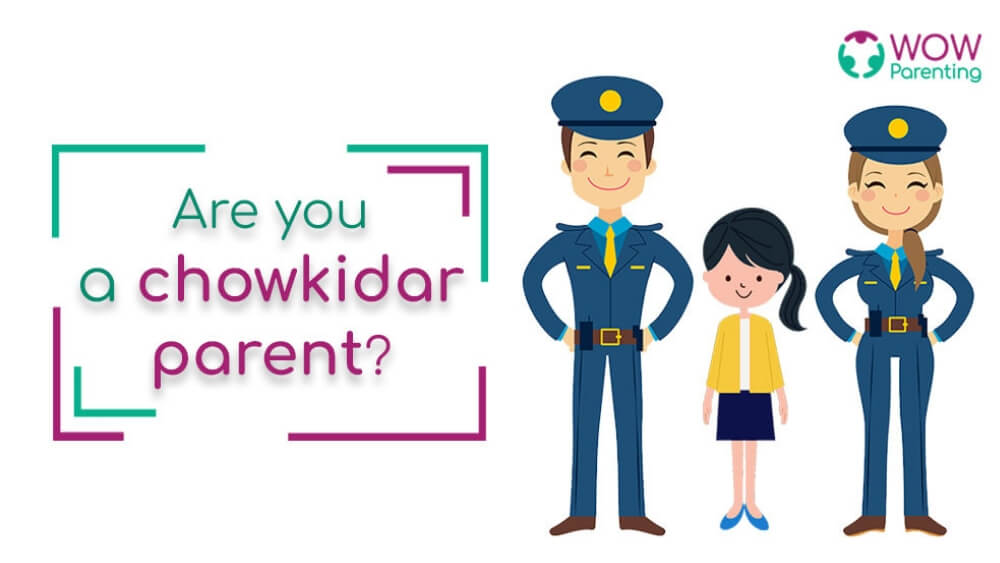 Donning the role of a parent is a challenge in itself and when the parent takes up the additional role of chowkidar, the parenting skills undergo twists and turns. The ultimate result of Chowkidar Parenting is an overprotected child who does not dare to do anything on his own or a very confident child who is also aware of success and failures and the in-between child, depending on the type of chowkidari the parent does.

Who is a chowkidar?

‘Chowkidar’ is a person employed to keep an eye and safeguard the premises from unwanted people or activities. It is a synonym for a security guard or watchman. In the present elections, this word chowkidar has been used to take a dig at the ruling party.

The three chowkidars, in fact, represent the three different attitudes of the parents when parenting their children. Let’s observe how this happens.

This parent keeps a twenty-four-hour watch on his/her child. The parent will know what’s happening in the child’s life without being inquisitive since they maintain an open window where the child is encouraged to share as much as possible.

Here the parent is scared about the future of the child. Thus, in that feat of fear they don’t perform their duties diligently. This leads to passive behavior among the parent and hesitates to interfere when there is a need.

A small example is when the child refuses to go to school. The mother or father is unable to force the child and are helpless.

This type of parent doesn’t care for his parenting duties. He/she is not interested in the child’s activities. The parent is more interested in his/her profession, extra-curricular activities or socializing. They leave the child to destiny.

The changes in the chowkidar phase:

As our child grows, our parenting/ chowkidari style also undergo changes. When our child is in his/her early years, we as parents need to be the alert chowkidar. This is the stage in which our child is innocent, vulnerable and unaware of the outer world. We have to keep an eye and guide our child in the right direction.

In pre-teens and teens stage our child has a mind of his/her own. He/she may or may not follow our parenting advise and may resent our chowkidari style or helicopter parent. They want more freedom in thought and action.

As parents, we can become passive chowkidar, and watch our child from a distance without interfering. Such children will be good at problem-solving.

And when our child has metamorphosed into an adult, we parents need to be the indifferent chowkidar giving our child full freedom and choice to lead the life he/she wants to.

As parents, we can become different chowkidars now and then when there is a need for it. There should be flexibility in our parenting style.

Our chowkidari style of parenting should be positive and not hamper the personality growth of our child. Instead, it should bring all-round development to the child. What is holding you back? Now you can say as well #MainBhiChowkidar

As a parent, we have to understand that we can incorporate chowkidar style of parenting to protect, teach, guide and motivate our child to grow into a well-balanced individual and not restrict his/her independence or choice. This should be the main aim of our parenting. Well, what type of chowkidar are you?